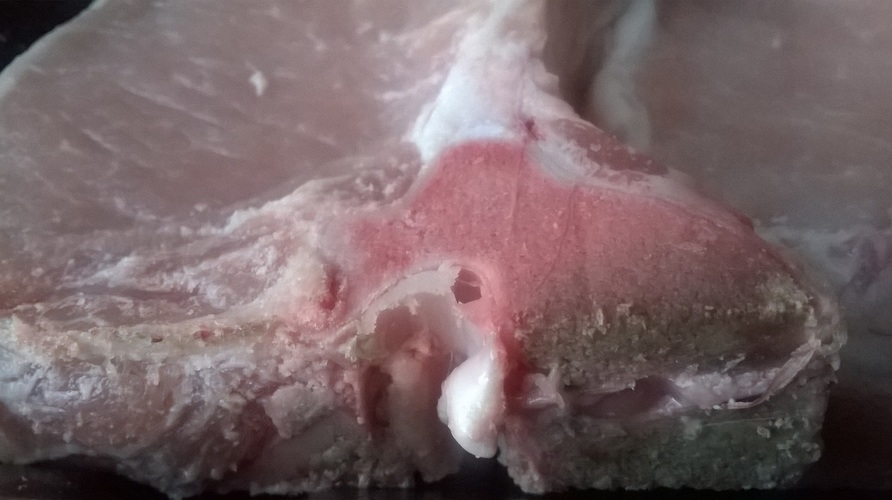 Pork is the flesh from a highly intelligent and social animal, the pig

Pork is flesh from the domestic pig, and it is the most commonly consumed meat worldwide. Pork is eaten both freshly cooked and preserved. Ham, smoked pork, gammon, bacon and sausage are examples of preserved pork.

The pig, who by many people is thought of as just meat, is a highly intelligent and social being. Studies have shown that pigs are smarter than dogs and that they can solve problems just as well as chimpanzees. Pigs have excellent long-term memories, comprehend a simple symbolic language, love to play, form complex social communities, can cooperate with one another, and exhibit empathy.

​The life of a pig on a factory farm is nightmarish
​
Most of the pigs spend their entire lives indoors, in extremely cramped, filthy factory farms under the constant stress of intense confinement. Pigs love to root in the soil and explore their surroundings, none of which they have opportunity to do on factory farms, where there’s usually only a slatted concrete floor with no bedding. Pigs are very clean animals, and if they are given sufficient space, they have different areas for sleeping, eating and defecation.

On factory farms, pigs are forced to live in their own feces and vomit and even amid the rotting bodies of dead pigs. The breathing air is very bad due to the high level of carbon dioxide, ammonia and dust. Pigs don’t sweat, so they like to bathe in water or mud to regulate their body temperature.  Pigs like to live in social groups of about eight individuals consisting of sows and their offspring. On factory farms, pigs are denied all these things so important to them. Additionally, pigs may have to endure abuse from workers, who e.g. punch, kick and smash the the heads of the animals into concrete.

The life of a sow

The life of a sow is utterly miserable. When she’s about six months old, she is made pregnant for the first time, mostly by artificial insemination. In many countries, the sow is put into a gestation crate (sow stall) for the time, or part time, of the pregnancy. The crate is extremely small, and the floor is made of slatted concrete and has usually no bedding. When it’s time for the sow to give birth, she is put in a farrowing crate, which is similar to the gestation create, but it has a small, additional space for the piglets. Before a sow gives birth, she has a strong urge to build a nest for the piglets, but on factory farms also this instinct is denied to her. To maximise production, sows have been bred to give birth to litters that can consist of up to fifteen piglets, while the normal number of piglets is about five. From each litter, it is common that a few piglets die before they reach the age of four weeks.

After the piglets are born, they are allowed to stay with their mother for about 4-5 weeks (normally a sow would nurse for up to 17 weeks), after which the piglets are taken away. In about a week from weaning off the piglets, the sow is impregnated again. After having given birth about three times, when the sow is only about two years old, her body is so worn out that she’s sent to slaughter. In normal circumstances, pigs can live up to twenty years. 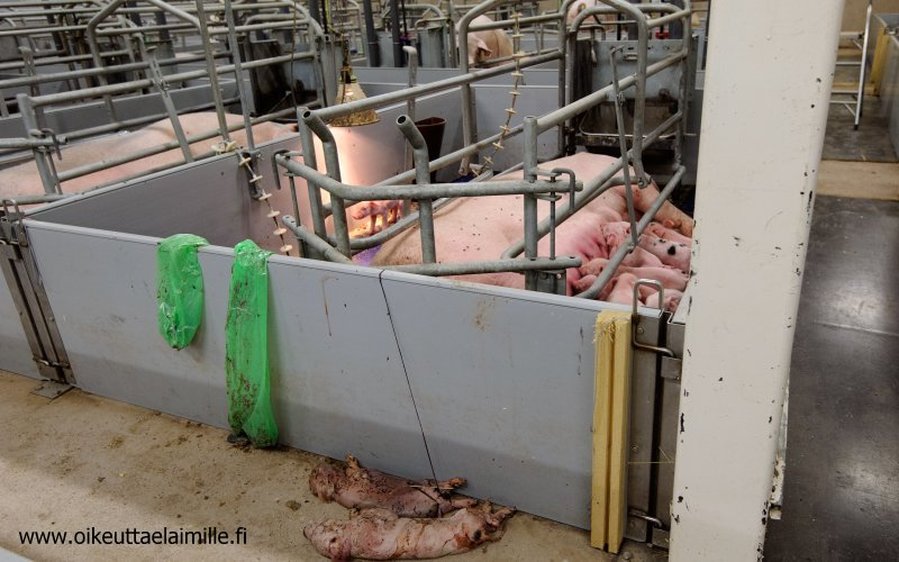 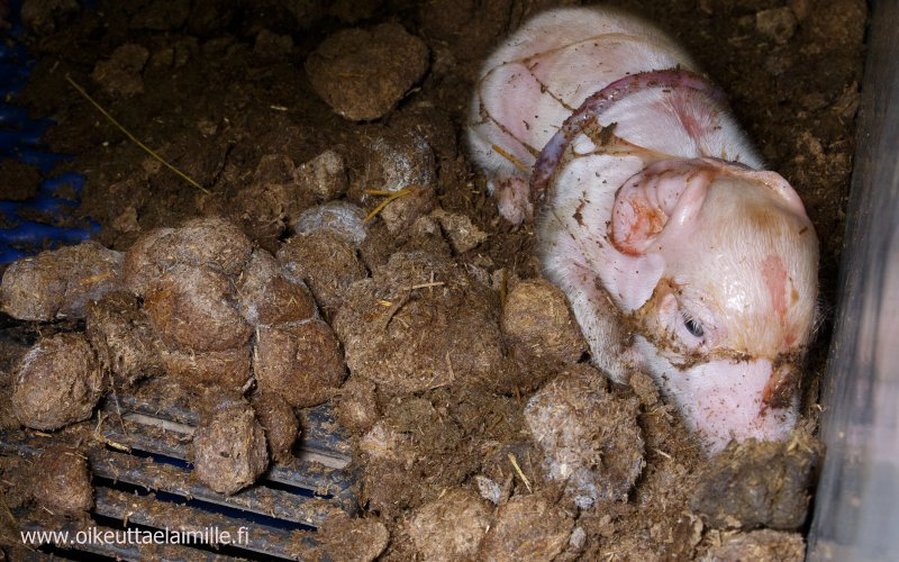 Neurotic  behaviour is common among pigs on factory farms

The horrific living conditions and extreme boredom on factory farms often manifests in abnormal and neurotic behaviour among pigs, such as biting on the tails and ears of other pigs, and repetitive biting at the bars of the crates. The infected wounds from the tail and ear-biting are very painful, and the infection can spread throughout the body, forming e.g. abscesses to the spine. Many pigs are completely apathetic and lie motionless without reacting to anything.

Painful procedures are performed without pain-relief

The pigs are often very sick, and are given too much antibiotics

Pigs often get excessive injuries such as arthritis, bed sores, and even lameness from standing or lying immobile on the hard, slatted concrete flooring. A main cause for many health problems is the excessive breeding, causing the animals to grow so fast that the bones and joints don’t develop quickly enough to stand the weight of the animal. The poor hygiene easily leads to multiple infections, and many pigs also suffer form gastric ulceration. Many farmers kill the sick animals e.g. by beating them with metal rods, by slamming their heads against the floor or by leaving them to die without food or water.

As in all intensive animal farming, pigs are given large amounts of antibiotics to survive the outbreak of diseases that run rampant in the filthy and overcrowded conditions. In many countries, antibiotics are given as a preventive measure and to increase growth. The constant, preventive use of antibiotics makes it possible to keep pigs alive in conditions that would otherwise kill them. The excessive use of antibiotics on factory farms is the main cause for antibiotic-resistant bacteria, which is a huge threat to human health. For instance the superbug MRSA is frequently found in supermarket pork. The filthy conditions on factory farms can lead to the contamination of the human food supply by bacteria like E.coli and salmonella. The outbreak of H1N1 (Swine Flu) was likely caused by the overcrowding of pigs on factory farms and the poor sanitation and waste management.

Each year, more than a billion live farm animals (poultry, cattle, pigs, sheep, goats and equines) are transported long distances to other countries – often overseas, when the journey can take weeks. Live animal export is a worldwide phenomenon, with Australian livestock export being the largest component of the trade. Long distance transport causes enormous suffering to the animals, and many of them die during the journey. The animals have to endure extreme overcrowding, exhaustion, dehydration, injuries, diseases, stress and abuse from workers. The animals range from weak, worn-out animals with brittle or broken bones to young, unweaned calves who are forced to stand for hours and days in overcrowded trucks without food or rest. The animals are often exported to countries with poor animal protection, and many animals are subjected to abuse and finally face an extremely painful and brutal death at the slaughterhouse. 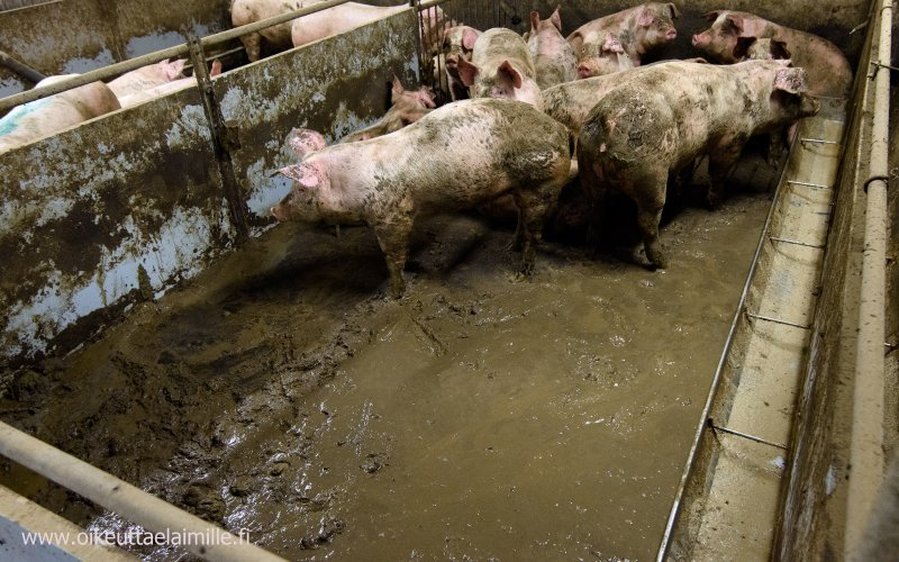 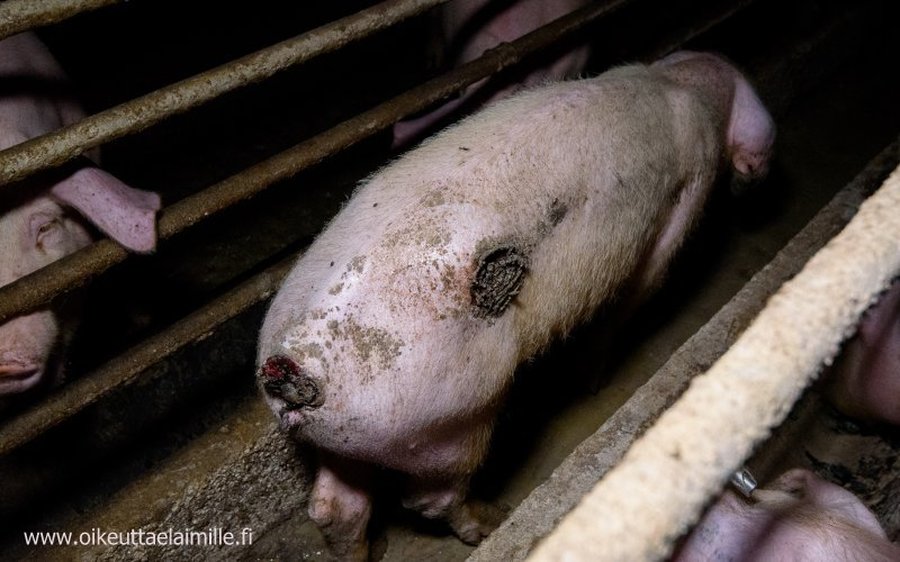 The suffering of the pigs culminates at the slaughterhouse. To get the terrified pigs onto the trucks bound for the slaughterhouse, which can be hundreds of miles away, the pigs are routinely beaten or given electric shocks. Especially pigs who are unable to stand and walk of their own are kicked and struck with electric prods.

The transport to the slaughterhouse in extremely crowded trucks, without food or water, is utterly stressing for the sensitive pigs. They pigs suffer from extreme temperatures and are forced to inhale ammonia fumes and diesel exhaust, and they struggle to breathe. Countless pigs die during transport. In winter some are frozen to death to the sides of the trucks, in summer, some die from heat exhaustion. Many pigs also get a heart attack or die from suffocation.

At the slaughterhouse, the panicking pigs are extremely roughly handled, and they are repeatedly beaten with electric prods to get them to move forward. Before being slaughtered, the pigs are stunned, mostly by electric or CO2 (carbon dioxide) stunning. Electric stunning renders the animal unconscious by passing an electric current through the animal's brain, and it is likely to be very painful. Electric stunning does not usually cause damage to the brain, so animal will regain consciousness if not quickly killed and bled out.

In CO2 stunning, which is considered to be the most humane method to stun pigs, the animals are forced into a steel cage called a gondola, which is then lowered into a gas chamber. The pigs are totally panic-struck, screaming at the top of their lungs and climbing over each other trying desperately to escape, while they suffocate. After being stunned and stuck, the pigs are dumped into scalding-hot water to remove their hair and soften their skin. Because of improper slaughter, many pigs are still conscious when they are dumped into the scalding tank.

Impacts of the pork industry on the environment and our health

As in all intensive animal farming, the pork industry causes substantial damage to the environment, including climate change, loss of biodiversity, water pollution, eutrophication, water shortage, deforestation as well as human starvation. According to studies, pork – especially processed meats such as bacon, sausages and ham – causes cancer. Excessive intake of meat can contribute to diabetes, heart disease and strokes. According to a survey, persons who eat a lot of red meat may die at a younger age than those who only eat a little meat. Dairy and meat are our main sources of harmful phthalates – chemical substances added to plastics to increase their flexibility, transparency, durability and longevity.

What you can do to help pigs

One of the most important things you can do to help pigs is to go vegan!
​