The fur industry is all about animal abuse 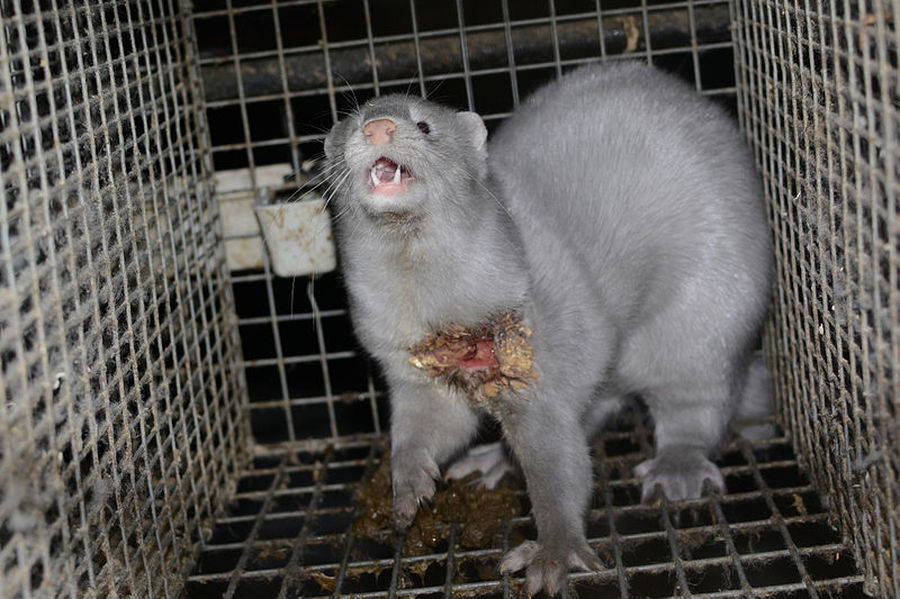 The image ”Fur farm in Kemijärvi, Finland" was published by the Finnish animal rights organisation Oikeutta eläimille ("Justice for Animals") after an undercover investigation of Finnish fur farms and it is licensed under CC Attribution 2.0 Generic.

Each year the fur industry mistreats, tortures and kills about 50 million minks, foxes, chinchillas and raccoons that live on fur farms, one billion rabbits and millions of sheep also living on farms, more than two million cats and hundreds of thousands dogs that are either farmed, stolen pets or stray animals, millions of wild animals caught in traps, and more than a hundred thousand seals that are clubbed to death in the wild. The pelts of these animals are turned into coats, hats, boots, trims, accessories, trinkets and toys. The fur industry is a huge, multimillion dollar business that keeps on growing mainly because of the increased demand from China.

Most of the animals used in the fur industry are raised on fur farms. These animals, like foxes and minks, are essentially wild animals, and they suffer unspeakably being locked up in tiny barren wire cages where they are unable to express their basic natural behaviours like running, making nests, finding mates and hunting. The cages are often kept in giant dark sheds or outdoors without protection from extreme weather conditions. The animals live in the midst of accumulated urine and feces and they are often sick, injured and infested by parasites. Many of the caged animals go insane and exhibit stereotypical behaviour like constant pacing along the cage wall. Also self-mutilation such as chewing on their own limbs is common, and sometimes they even eat their cagemates. To avoid damaging the fur, the animals are killed by electrocution, gassing or neck-breaking, which are extremely cruel and painful methods. Major producers of farmed fur are Denmark, China, the Netherlands, the Baltic countries, USA and Finland.

The living conditions of the farmed fur animals are even worse in China, where there are no penalties for abusing animals, and at slaughter the animals are often thrown to the ground and bludgeoned. In addition, millions of cats and dogs are killed for their fur, and they are bludgeoned, hanged, bled to death or strangled with wire nooses. It’s not uncommon that the animals are skinned alive. Many of the dogs and cats are stolen pets or stray animals picked from the streets. China is the world’s largest exporter of furs, and the fur products are deliberately mislabelled and exported all over the world.

In countries such as USA, Canada and Russia it’s still legal to use traps to catch animals, and millions of wolves, lynx, foxes, bears, raccoons, bobcats and coyotes are trapped for their fur each year. A common type of trap is the steel-jaw trap which shuts on the animal’s limb causing excruciating pain as it cuts into the animal’s flesh and bone. Some animals caught in these traps try to escape by chewing off their trapped limbs. The animal can suffer for days before the hunter finally arrives and kills it, often by strangling, beating or stomping to avoid damaging the fur.  Also lots of other animals such as dogs, cats, birds are mutilated or killed by traps.

Each year, tens of thousands baby seals are killed for their fur in Canada, and up to 85,000 in Namiba. The seal slaughter is extremely brutal - the seal pups are violently separated from their mothers and repeatedly beaten with clubs tipped with metal hooks until they die. The pups are just a few weeks old, so they have no chance to escape the hunters. Sometimes the seals are still alive when they are skinned.

In addition to causing extreme animal suffering the fur industry harms the environment. The animals produce enormous quantities of feces which contain phosphorus, a mineral which in large quantities is harmful to the environment. After slaughtering an animal, its skin has to be treated with toxic substances to keep it from rottening. Many farmers have been discovered releasing toxic waste into the environment. The chemicals can also directly be harmful to consumers – e.g. toxic substances have been detected in fur trims on children’s clothes.