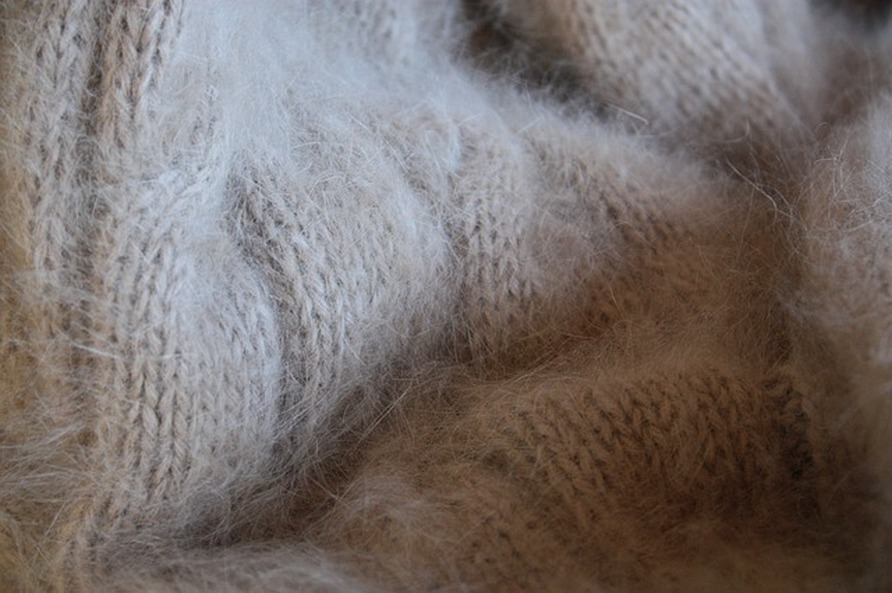 Image license: CCO Public Domain
The angora industry
​
​The soft and fluffy angora wool is used in many products, such as sweaters, socks, scarves, hats, mittens and blankets. Around 90% of the world’s angora wool is produced in China, and small quantities are produced e.g. in Argentina, Chile, the Czech Republic and Hungary. More than 50 million angora rabbits live on rabbit farms in China, where there are no penalties for animal abuse.

Rabbits screaming with pain and fear while they are plucked

In 2013, the animal rights organisation PETA released shocking undercover footage from almost a dozen Chinese angora farms. The terrified rabbits are screaming at the top of their lungs with pain and fear while their fur is violently ripped out until only bald, raw, bleeding skin remains. Another harvesting method is shearing using metal scissors The rabbits are tethered by the front and back legs, or stretched across boards while they are sheared. The workers work very fast, and the desperate and struggling animals constantly get deep and bleeding cuts into their skin.

The lives of the rabbits is endless suffering

After this extremely agonising experience, the gentle, sensitive rabbits are in severe shock and lie motionless inside their cages. The rabbits are plucked every three months, throughout their lives. The rabbits live alone in tiny, filthy wire-mesh cages surrounded by their own faeces, with inadequate protection from the elements. The thin wires injure the rabbits’ sensitive footpads, and they often get eye infections from the stench of ammonia from the urine-soaked floors. The rabbits never get a chance to do anything that’s important to them, such as digging, jumping, running or interacting with other rabbits. These highly social and naturally scrupulously clean animals slowly go insane, and about 60% of the rabbits die only after one or two years.

At the age of 2-5 years, the rabbits’ have their throats slit

On larger farms, male rabbits are killed at birth, because they don’t produce as much wool as female rabbits. They can be considered the lucky ones. When the rabbits reach 2-5 years of age, those who survive the horrific, constant abuse are hung upside down, their throats are slit, and they are sold to local markets.

There is no such thing as “humane” angora

When you buy a product containing angora, the angora wool most likely originates from Chinese rabbits who have been subjected to extreme cruelty, as described above. Even if the finished product was assembled elsewhere and the label says e.g. ”Made in France”, the angora is probably from China. Also on angora from farms that have been deemed “humane” by third-party auditors there is neglect, suffering and cruelty beyond imagination.If you care for animals, please leave angora on the shelf!