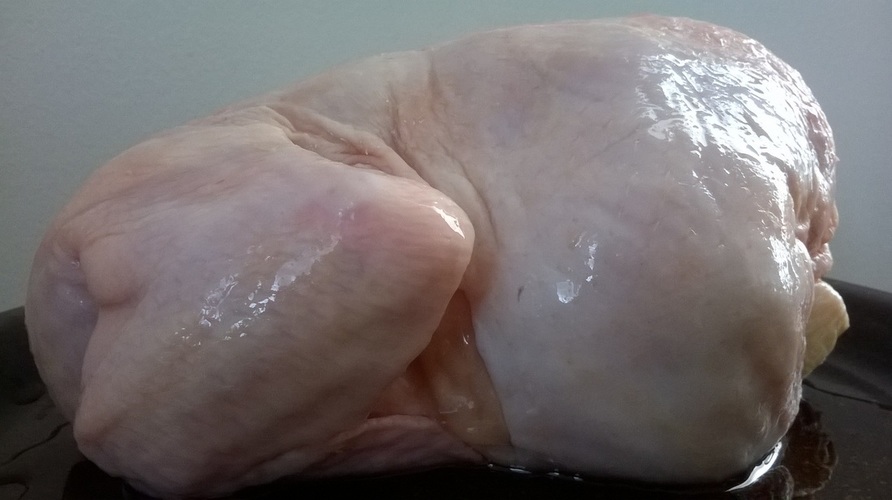 Chickens are the most abused animals in the world

Chickens used for their meat are called broilers, and they have been bred to grow much bigger and faster than egg laying hens.

In 2012, a staggering 59,794,239,000 broiler chickens were slaughtered for their meat (source: FAO). More chickens are raised and killed for food than all other land animals combined. Despite this, many countries (e.g. the U.S.) don’t have any regulations to protect these animals which, together with egg laying hens, are the most abused animals in the world.

Chickens are smart, sensitive, inquisitive and social animals whose cognitive abilities are in some cases more advanced than those of cats, dogs, and even some primates. Each chicken is an individual with a distinct personality, and, like all animals, chickens value their own lives. Chickens are very social and form complex hierarchies (”pecking orders”), and they are always looking out for their chicks, families and other chickens in their group. Chickens can complete complex mental tasks, learn from watching each other, demonstrate self-control, worry about the future, and pass cultural knowledge from generation to generation. Chickens remember the faces and ranks of more than 100 other birds, which, according to scientists, is an undeniable sign of advanced intelligence. Chickens have more than 30 types of sounds to distinguish between different type of threats, and a mother chicken begins to teach them to her chicks before they even hatch.

Under normal conditions, the mother chicken would lovingly nurture, protect and teach her baby chicks until they are old enough to take care of themselves. On factory farms, the chicks never get to meet their parents, because they are born in giant hatcheries, where eggs are hatched under artificial conditions. At the hatcheries, workers pick out the weak chicks from the conveyor belt and rip off their heads, or just throw them into black bin liners leaving them to suffocate. The chicks that survive to the later stages of the factory line are dropped onto a ”carousel” and workers pick them up, stab them with a vaccination needle, and throw them down a hole in the middle of the carousel. Machines fire the birds down chutes and into crates, leaving the one-day-old, tiny chicks dazed and confused. The crates are shut in dark cupboards after which they are shipped to industrial growth farms.

In natural conditions, chickens like to live in smaller groups where they can find their spot in the pecking order, and they love to forage for food, take sun and dustbaths and perch at night. On factory farms, chickens are treated as lifeless raw material, and all their behavioural needs remain completely unfulfilled.

The majority of chickens raised for meat globally are reared in in intensive industrial farming systems. These giant, windowless sheds house tens of thousands birds, and artificial lighting is used to make birds eat as often as possible. The sheds are extremely filthy, and the air is filled with ammonia and particulate matter from feces and feathers – feces are not removed for the whole time the chickens are alive. The sheds are severely overcrowded, and as the birds grow larger they are forced to walk on top of one another. The extreme confinement and unnatural living conditions cause stress and frustration, which manifests in abnormal behaviour such as pecking at each other and pulling one another's feathers out, and sometimes even cannibalism. With such huge amount of birds it’s impossible for the workers to spot sick and dying birds, so they are mostly just left to suffer and slowly die. Additionally, chickens may have to endure abuse from workers, who punch, beat, stab and rip heads off the animals. 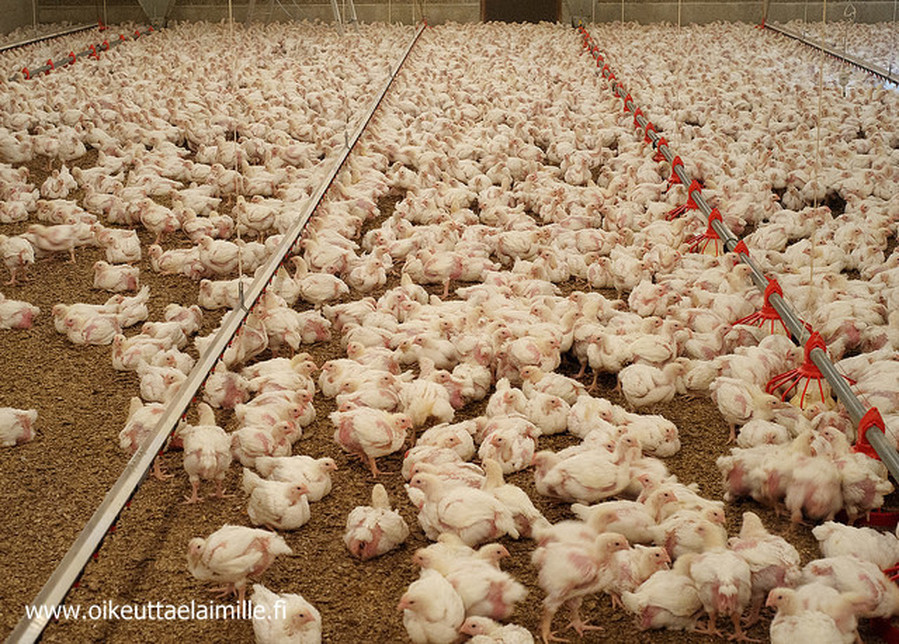 Broiler chickens have been bred and drugged to grow extremely large as quickly as possible. The birds reach their slaughter weight of about two kilogrammes at the age of 35-40 days – twice as fast as fifty years ago. The rapid and excessive growth leads to severe health problems for the chickens, because their skeleton and internal organs can’t keep up with the weight gain. Due to the selective breeding, the chickens have very big breast muscles, which further distorts their anatomy and puts great pressure on their legs. Most of the birds suffer from constant pain in their legs and cannot stand, and spend much of their lives lying in their own waste with open sores and infections. Many of the birds that become crippled or lame die of starvation or dehydration, because they are unable to reach the food and water. In natural circumstances the mother chicken teaches her chicks how to eat and drink, but on factory farms there is nobody to teach the chicks. The chicks who don’t learn to eat and drink on their own die of starvation or dehydration. The heavily polluted air causes respiratory diseases, bronchitis and painful eye conditions, and birds frequently die from heart failure or ascites (”water belly”), caused by the unnatural growth. 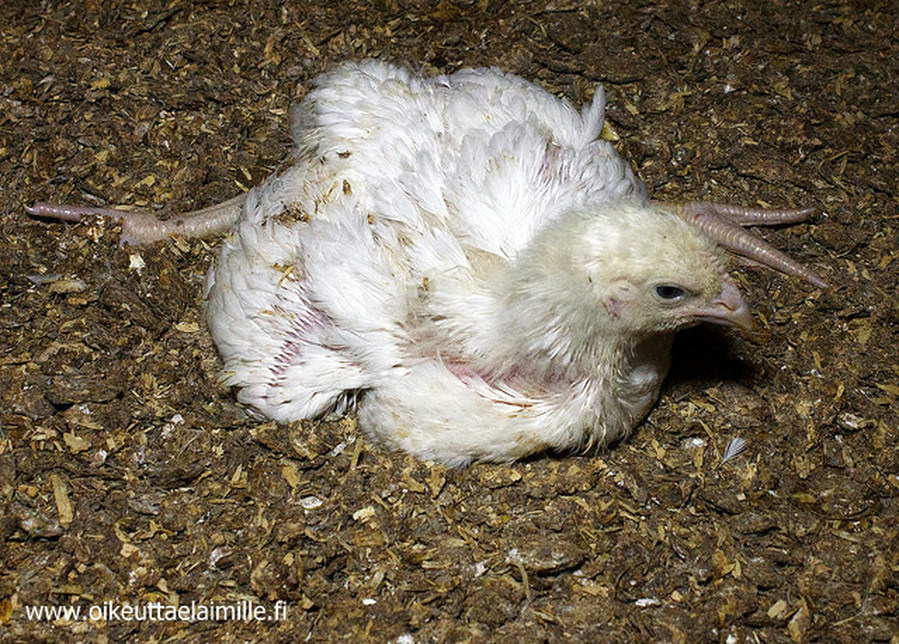 Breeder chickens are starved to prevent them from gaining weight

Chickens that are allowed to reach maturity and to breed are also raised in giant, filthy, overcrowded sheds without access to sunlight, fresh air, or anything else that’s important for them. In many countries, breeder chicks are debeaked using a razor blade, hot blade, or infra-red laser, which is a very painful procedure. Many of the debeaked chicks die of shock on the spot, and others die of starvation or dehydration because they are unable to eat or drink because of the pain. The reason for debeaking birds is to prevent them from pecking each other to death – an abnormal behaviour caused by the horrific living conditions on factory farms.

Breeder chickens are forced to live in the appalling conditions of factory farms for more than a year. These chickens have an even higher risk of organ failure and death than broiler chickens, because they live longer. Consequently breeder chickens are put on a severe diet to curb their growth and thereby prevent some of the health problems. The breeder chickens are constantly hungry and become extremely stressed and frustrated as a result. To relieve their hunger, the birds try to drink more water, but many times the amount of water is also reduced so that farm workers don’t have to clean up wet manure.

After more than a year of deprivation and confinement, the bodies of the breeding birds are too exhausted to produce any more broiler chicks, and they are sent to slaughter.

Each year, more than a billion live farm animals (poultry, cattle, pigs, sheep, goats and equines) are transported long distances to other countries – often overseas, when the journey can take weeks. Live animal export is a worldwide phenomenon, with Australian livestock export being the largest component of the trade. Long distance transport causes enormous suffering to the animals, and many of them die during the journey. The animals have to endure extreme overcrowding, exhaustion, dehydration, injuries, diseases, stress and abuse from workers. The animals range from weak, worn-out animals with brittle or broken bones to young, unweaned calves who are forced to stand for hours and days in overcrowded trucks without food or rest. The animals are often exported to countries with poor animal protection, and many animals are subjected to abuse and finally face an extremely painful and brutal death at the slaughterhouse. 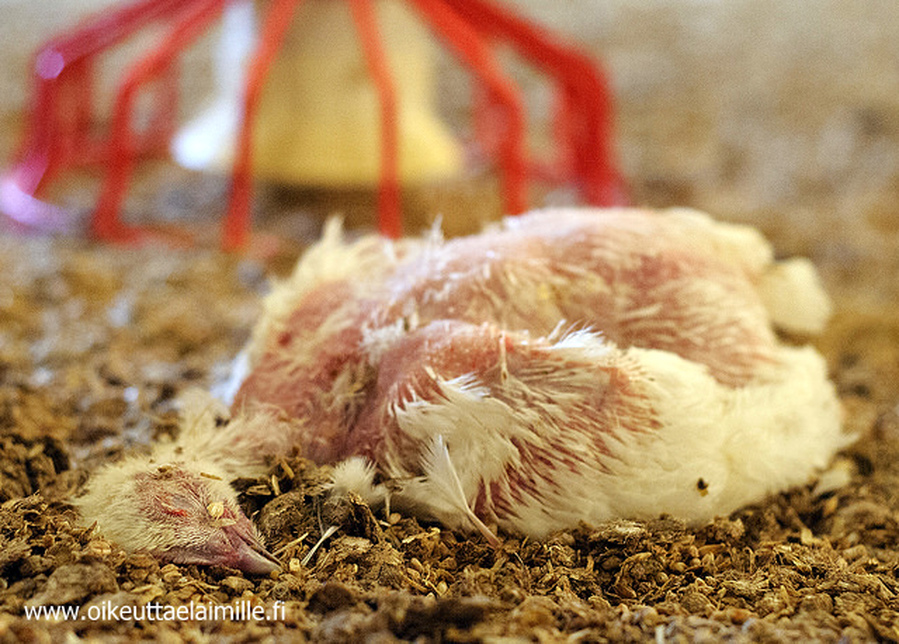 Despite their large size, broiler chickens are still babies when they are slaughtered at 5-6 weeks of age when they weigh about two kilogrammes. Workers violently grab multiple birds by their legs and shove them into crates for transport. A chicken-catching machine can also be used. Countless birds have their legs and wings broken or hips dislocated from the rough handling, and many die on the nightmarish journey to the slaughterhouse. Despite the fact that the transport to the slaughterhouse can take many hours through extreme weather, the birds are denied food and water before and during transport.

At the slaughterhouse, the birds are brutally shackled upside down by their legs, which is very painful especially for the many birds with damaged feet. Many birds have their legs or wings broken when they are shackled. The birds are stunned by being dipped into an electrified water bath, or by gassing. Thereafter the chickens are dragged past either a slaughterhouse worker with a knife or an automatic rotating blade to have their throats slit, and dipped into a scalding tank to loosen their feathers. Some birds miss the stun bath and may have their throats cut whilst fully conscious. In some countries (e.g. the U.S.) the current used in the stun bath is so low, which means that all chickens are completely conscious while their throats are cuts. Birds can also still be alive when they enter the scalding tank, if their throats have been improperly cut.

Impacts of the poultry industry on human health

As in all intensive animal farming, chickens are given large amounts of antibiotics to survive the outbreak of diseases that run rampant in the filthy and overcrowded conditions. In many countries, antibiotics are given as a preventive measure and to increase growth. The constant, preventive use of antibiotics makes it possible to keep chickens alive in conditions that would otherwise kill them. The excessive use of antibiotics on factory farms is the main cause for antibiotic-resistant bacteria, which is a huge threat to human health. Chickens at the grocery store are frequently contaminated with salmonella, campylobacter, E. coli and other contaminants, and e.g. avian influenza (also known as bird flu) can be passed on to humans from infected chickens.

Chicken is often considered a healthy and “lean” alternative if you want to eat meat, but the truth is different. It has been found that chicken contains as much fat, gram for gram, as a Big Mac, and it contains more than twice as much fat as it did in 1940, a third more calories and a third less protein. Up to 92 per cent of all chicken on sale is contaminated with faecal matter, which means that if you’re eating chicken, you’re literally eating poo.

Dairy and meat are our main sources of phthalates – chemical substances added to plastics to increase their flexibility, transparency, durability and longevity. Phtalates are also used e.g. in cosmetics and pesticides. Studies show that exposure to phthalates is greater from ingestion of certain foods, rather than exposure via water bottles as is most often first thought of with plastic chemicals. Researchers have linked phthalates to asthma, attention-deficit hyperactivity disorder, breast cancer, obesity and type II diabetes, low IQ, neurodevelopmental issues, behavioral issues, autism spectrum disorders, altered reproductive development and male fertility issues.

Impacts of the poultry industry on the environment

As in all intensive animal farming, the industrial chicken production is a serious threat to the environment. The chicken industry kills fish and other wildlife, harms habitat, and pollutes land, air and water. The chicken industry is responsible for a a massive waste of resources, such as water. To produce one kilogramme of chicken meat, 4,325 litres of water is required.

What you can do to help chickens

One of the most important things you can do to help chickens is to go vegan!