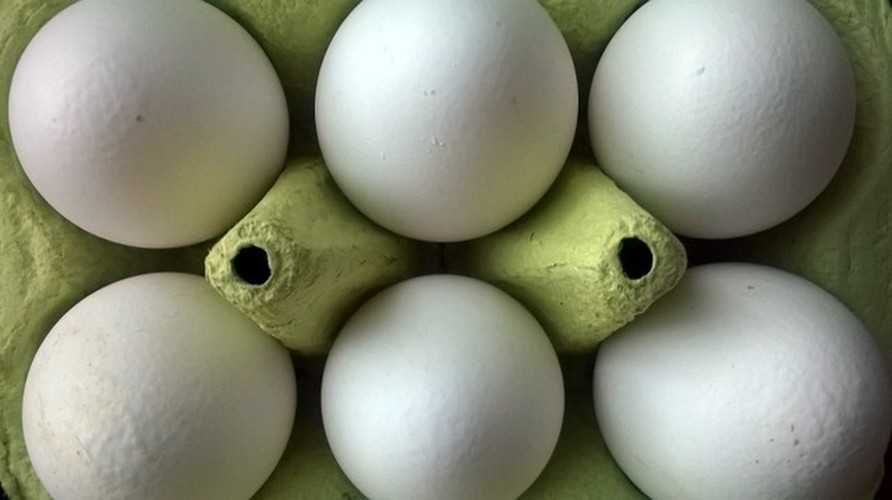 The eggs at the grocery store are the egg cells from hens, and usually the eggs are unfertilised. The eggs consist of a protective eggshell, albumen (egg white), and vitellus (egg yolk), contained within various thin membranes. It takes 24-26 hours for a hen to produce an egg.

During 2002 approximately 53.4 million tonnes of table eggs were produced.  The world’s the largest egg producer is China with 20.25 million tonnes eggs produced in 2002, followed by the United States, India, Japan and Mexico.

Chickens are smart, sensitive, inquisitive and social animals whose cognitive abilities are in some cases more advanced than those of cats, dogs, and even some primates. Each chicken is an individual with a distinct personality, and like all animals, chickens value their own lives. Chickens are very social and form complex hierarchies (”pecking orders”), and they are always looking out for their chicks, families and other chickens in their group. Chickens can complete complex mental tasks, learn from watching each other, demonstrate self-control, worry about the future, and pass cultural knowledge from generation to generation. Chickens remember the faces and ranks of more than 100 other birds, which, according to scientists, is an undeniable sign of advanced intelligence. Chickens have more than 30 types of sounds to distinguish between different type of threats, and a mother hen begins to teach them to her chicks before they even hatch.

Chickens are the most abused animals in the world

Chickens – raised for their flesh or used for egg production – are the most abused animals in the world. It is estimated that there are 4.93 billion egg laying hens in the world. Most of the egg laying hens live in atrocious conditions locked up in tiny battery cages, often sick or injured and forced to lay far more eggs than their bodies can put up with. Even in a developed country like the US (the second largest producer of eggs globally), there are no regulations regarding the breeding, rearing, sale, transportation, or slaughter of chickens.

Chicks never meet their mothers, are frequently mutilated and the males are killed

Under normal conditions, the mother hen would lovingly nurture, protect and teach her baby chicks until they are old enough to take care of themselves. On factory farms, the chicks never get to meet their mothers, because they are born in hatcheries, where eggs are hatched under artificial conditions. The male chicks of egg laying hens are useless to the egg and meat industry, so they are killed shortly after birth by being ground up alive in giant macerators, gassed, or left to suffocate in garbage bags. In many countries, female chicks are debeaked using a razor blade, hot blade, or infra-red laser, which is a very painful procedure. Many of the debeaked chicks die of shock on the spot, and others die of starvation or dehydration because they are unable to eat or drink because of the pain. The reason for debeaking birds is to prevent them from pecking each other to death – an abnormal behaviour caused by the horrific living conditions on factory farms.

In natural conditions, egg laying hens love to peck and scratch at the ground, take dust baths, sunbathe, preen their feathers, perch at night, and interact with other hens in social groups. A typical flock consists of about 5-20 hens and 1-2 roosters. Hens like to find a private place where they make a nest and lay their eggs, and they love to take care of and teach their baby chicks. For the majority of egg laying hens, these behavioural needs remain completely unfulfilled. Additionally, hens may have to endure abuse from workers, who for instance grab their necks and swing them around in circles attempting to break their necks and throw live birds into trash cans.

Nearly all egg laying hens in the world spend their entire lives crammed closely together in cages so small that there’s no space for them to stretch their wings, scratch themselves or even to lift their heads properly or to lie down comfortably. The cages are usually piled on top of each other in huge, windowless sheds. The wire mesh of the cage cripples the birds’ feet, damages their skin and rubs off their feathers. The lack of exercise makes their bodies degenerate, and unable to scratch at the ground, their claws overgrow often curling round the wire mesh.

The hens are so tightly packed together that the normally clean animals are commonly forced to urinate and defecate on one another. The stench of ammonia and feces is horrific, and the toxic gases cause eye infections, viral infections and upper respiratory tract infections. The extreme confinement and unnatural living conditions cause stress and frustration, which manifests in abnormal behaviour such as pecking at each other and pulling one another's feathers out, and sometimes even cannibalism. Many birds die, and the surviving birds are often forced to live together with their dead and dying cagemates. 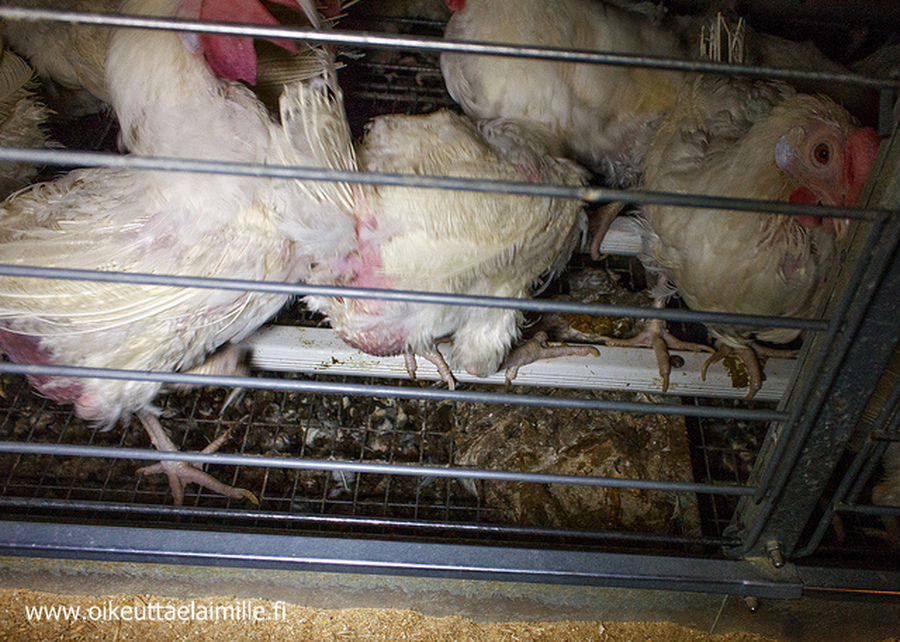 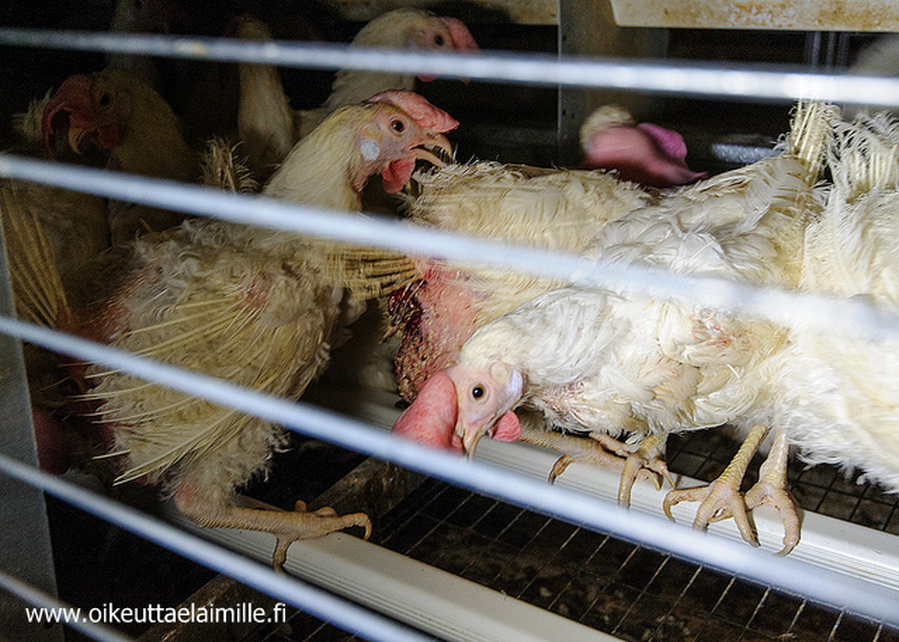 The ’free range’ and other similar labels only makes consumers feel good, not animals

Also on free-range, organic and other types of so-called more humane farms, the living conditions of the hens are mostly far from satisfactory. On free-range farms, it is common that the hens are kept in multi-tier sheds housing tens of thousands of birds. The hens are crammed on to shelves, clambering over each other, and many of the birds never make it outside to the range. Because of the extreme crowding, it is mostly impossible for the chickens to establish social groups and pecking orders. With so many birds, it is very difficult for the workers to spot sick or dying birds, and many of the birds are left to slowly die. In many countries, beak-trimming is common practice on free-range and organic farms. As with all commercial egg laying hens, male chickens on free-range and organic farms are killed shortly after birth, and the egg laying hens are usually slaughtered after 1-2 years of egg production. 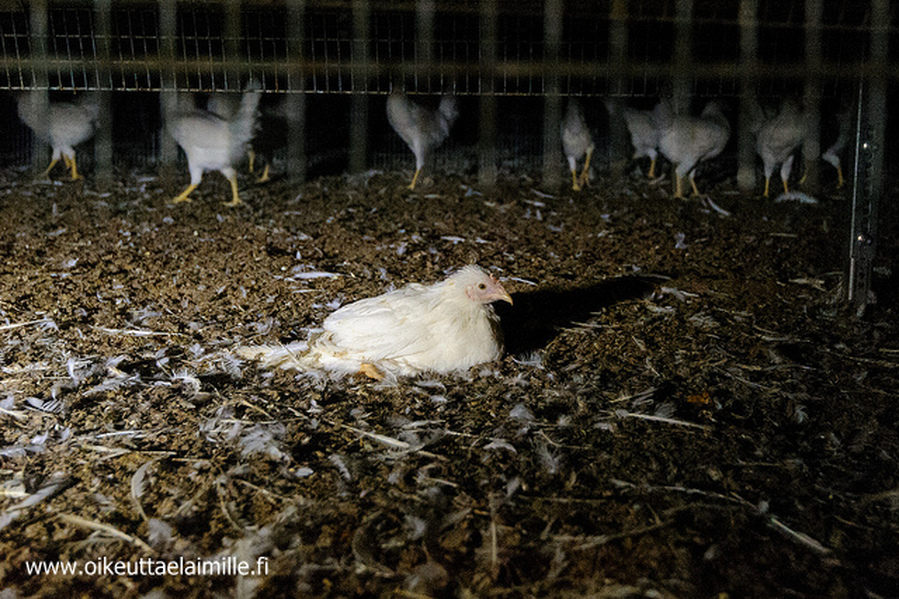 A wild hen lays 10-15 eggs a year and only during breeding season while the modern egg laying hens have been genetically bred to lay up to 350 eggs a year – almost one egg a day. By using artificial light, the hens are manipulated to lay eggs also outside breeding season.

Producing an egg is extremely exhausting, because the egg requires much nutrients, especially calcium for the shell. For each egg shell produced, much more calcium is drained from a hen’s body than she can assimilate from her daily food. Egg laying hens therefore commonly suffer from severe osteoporosis leading to brittle and broken bones, and even paralysis. Other conditions egg laying hens often suffer from are uterine prolapse, ovarian cancer, peritonitis, egg binding (large eggs getting stuck), fatty liver syndrome and cage layer fatigue. 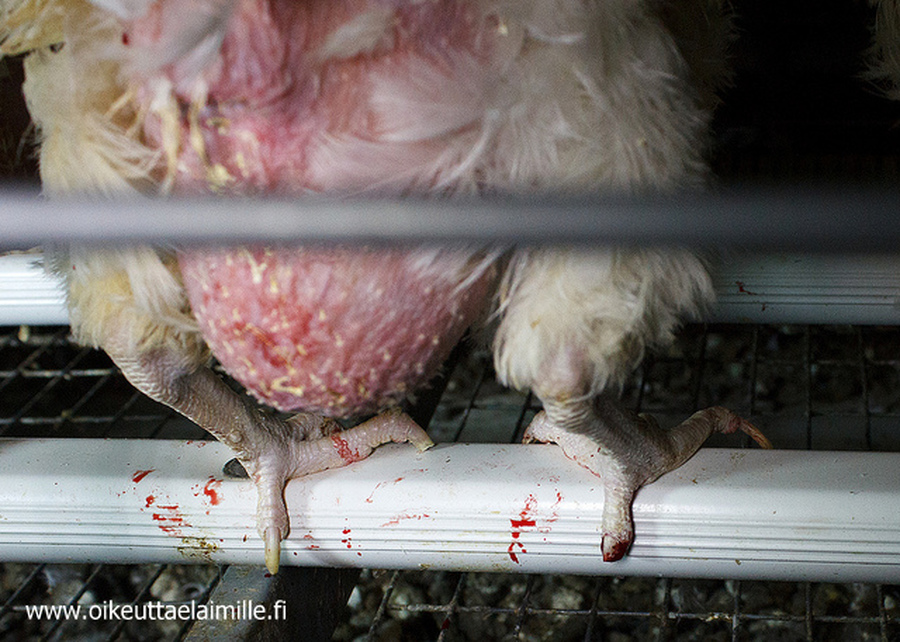 In normal conditions a hen lives for about ten years, but on a factory farm the body of an egg laying hen is normally exhausted after 1-2 years. As a last resource to exploit the birds to the maximum, in some countries (e.g. the US) it is common practice to starve hens to force them to produce more eggs. In this procedure, which is called forced moulting, the hens are denied food and water for up to 18 days, which shocks their bodies to moult and subsequently start producing more eggs. Another method to induce forced moulting is to give the animals low-calory feed. If the hens survive the forced moulting, it can be repeated two to three times, after which their bodies are completely worn out, and they are sent to slaughter.

If the hens are to be slaughtered in a slaughterhouse, they are violently grabbed and shoved into small crates, and loaded onto trucks. A large number of birds have their brittle, calcium-depleted bones shattered during the rough handling, and many die during transport. At the slaughterhouse, the birds are shackled upside down, dragged through an electrified water bath to stun them, dragged past either a slaughterhouse worker with a knife or an automatic rotating blade to have their throats slit, and then dipped into a scalding tank to loosen their feathers. Some birds miss the stun bath and may have their throats cut whilst fully conscious. In some countries (e.g. the U.S.) the current used in the stun bath is so low, which means that all hens are completely conscious while their throats are cuts. The birds can also be stunned by gassing. Birds can be still alive when they enter the scalding tank, if their throats have been improperly cut. The flesh is used in products where the bruises and deformities can be hidden from the consumers, e.g. chicken soups, chicken pot pies or chicken paste.

Most of the “spent” egg laying hens have too little muscle tissue, or are too deformed and worn out to be used for human food. These hens are killed on the farm, where they are gassed to death. The hens suffocate slowly, gasping for air, while the shed is filled with gas. The procedure can take up to an hour, and means substantial suffering for the hens. The gassing can also be made in a mobile chicken slaughter unit. In some countries other common methods of disposal are grinding the birds alive or dumping them into landfills. The carcasses usually end up as animal feed. 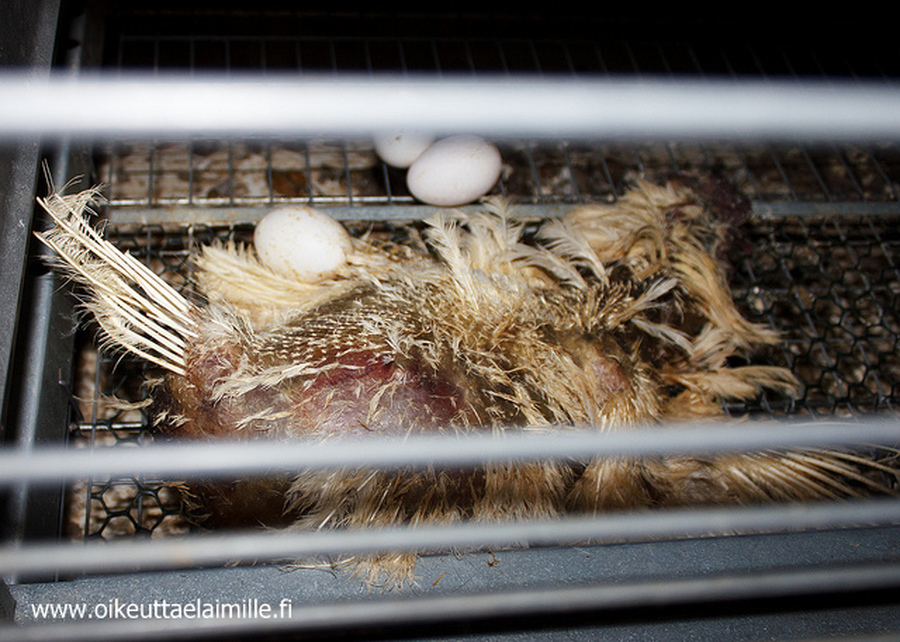 Impacts of the poultry industry on the environment

As in all intensive animal farming, the egg and chicken production is a serious threat to the environment. The egg industry kills fish and other wildlife, harms habitat, and pollutes land, air and water. The egg industry is responsible for a a massive waste of resources, such as water. To produce one egg, 196 litres of water is required.

What you can do to help egg laying hens

One of the most important things you can do to help egg laying hens is to go vegan!