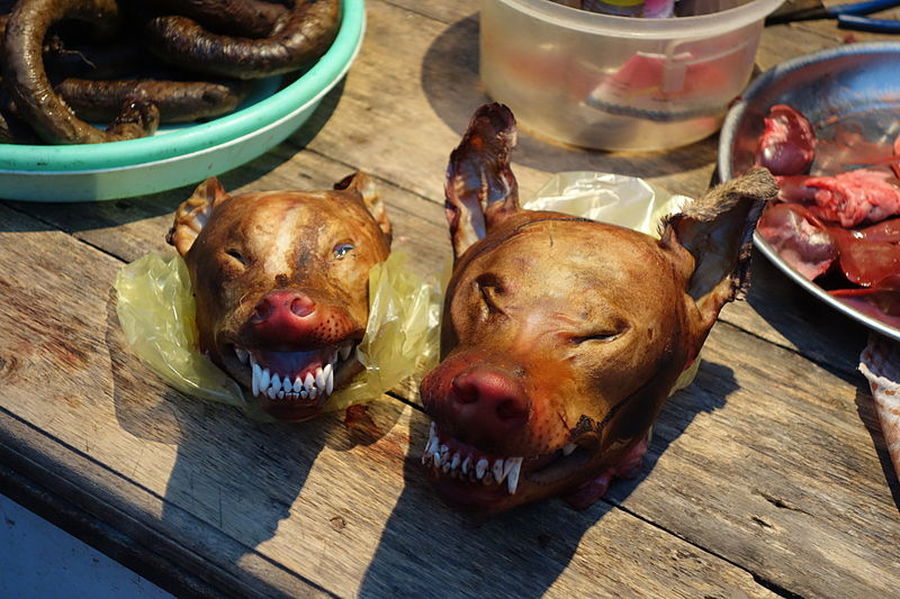 The image ”Dog meat at a market stall in Ninh Binh”  by Schwede66 is licensed under Attribution-ShareAlike 3.0 Unported

Many millions of dogs and cats are consumed as “health food” every year in Asian countries like South Korea, China, Thailand, the Philippines, Vietnam and Indonesia as well as in African countries such as Cameroon, Ghana, Liberia and Nigeria. It has been estimated that 25 million dogs are eaten each year by humans.The lives and deaths of these dogs is utterly cruel.

From birth to slaughter, the dogs spend their lives crammed in tiny metal cages with no space to move, with no protection from extreme weather and no water, exercise, or medical care. Their eardrums are often burst to prevent them from barking, or their muzzles are tied. The dogs are often bred at specific dog farms, but stray dogs are also captured or pet dogs are snatched or sold for the needs of the dog meat trade.

In many countries there’s a widespread belief that dog and cat meat is beneficial for the health. It is also believed that the more the dogs and cats suffer, the better the meat will taste and the greater the health benefits will be. The animals are therefore made to experience extreme fear and suffering prior to death. The dogs are often butchered in full view of the others, and the method of slaughter is extremely brutal – they are electrocuted, hanged, beaten to death or burnt or skinned alive. Some have a blow torch used on them while they are still alive to remove their fur. The cats are often boiled alive.

The dog and cat meat trade in these countries is either not banned, or the existing legislation is not being sufficiently enforced, like the Philippines where dog meat consumption was banned in 1998. Apart from causing the animals extreme suffering, the trade is also a risk to humans by making it possible for rabies and other diseases to be transmitted to humans.